There has been a lot of speculation on the route of the Exodus and why the traditional site hasn’t yielded any archaeological evidence.  After all, if two million people wander in a desert for forty years, you’d think that at least something would be found to support it.  But, nothing at all has been unearthed in the Sinai Peninsula supporting the biblical account of the Exodus.  Various explanations for this range from the idea that it is naturally difficult to find any archeological evidence in a desert of sand to the explanation that the traditional site is the wrong one.

First of all, no archaeological find has ever contradicted the Bible.  Archaeology has only confirmed what the Bible says.  As has been the case with so many other things in the Bible, as archaeology progresses, they will most certainly uncover evidence in the future.  The Bible has yet to be proven wrong by archaeology. 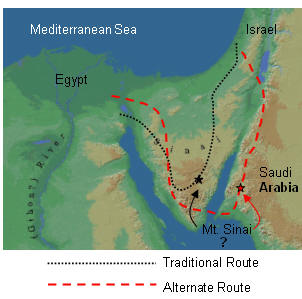 Third, it may be that the traditional site of Mt. Sinai is incorrect.  Gal. 4:25 says, “Now this Hagar is Mount Sinai in Arabia, and corresponds to the present Jerusalem, for she is in slavery with her children.” Present theories dealing with Mt. Sinai’s location have it in the Sinai Peninsula, yet the Bible says it was in Arabia.  The map to the right shows the traditionally accepted route (in black) and the currently accepted location of Mt. Sinai.  The problem is that there has been absolutely no archaeological evidence unearthed at that site to verify the Exodus.  The route in red shows an alternate path that is consistent with Paul’s description in Gal. 4:25.  This would have placed Mt. Sinai in Arabia, which is now Saudi Arabia, instead of the traditionally accepted Sinai peninsula.

In a recent book titled “In search of the Mountain of God” by Bob Cornuke and David Halbrook (Broadman and Holman, 2000), Bob Cornuke (a Christian) recounts his story of going to Saudi Arabia with his friend Larry Williams (a non-Christian commodities trader).  They uncovered evidence of an alternate site where the real Mt. Sinai might be.  Bob Cornuke was a police officer, swat team member, and crime scene investigator in Southern California and is the President of the Bible Archaeology Search and Exploration (BASE) Institute BaseInstitute.org.  He and Mr. Williams have produced a video and book (available on that site) where they claim to have found evidence in Saudi Arabia to support that Mt. Sinai is located within its borders.  Now, I must admit that this has not been verified by any “official” archaeologists; but the video, which I have seen, does raise some interesting possibilities.

Mr. Cornuke and Williams claim to have simply let the Bible guide them as they attempted to locate the actual route of the Jews of the Exodus.  Through trial and error over several weeks, they followed what they believed was the route as is laid out by the Bible; and they found the items described in Exodus 13-19 including, springs, a split rock, an altar, an underwater land bridge at the end of the Sinai Peninsula where the people of Israel could have crossed, and much more.  The present location of Mt. Sinai, according to the locals in their account, is known as Jabal Al Laws and is traditionally known by them as the Mount of Moses.  The Saudis have the area fenced off with warning signs in Arabic and English telling people not to enter.  If this is so, why would the Saudis not want anyone to know about the place?   It might be because if Mt. Sinai is located in Muslim territory, then one of the holiest places of the Jewish and Christian religions, it could pose serious political problems.

I must admit that this is speculative at present, and it has not been verified.  But the video was compelling.  Whether or not this is a valid option is yet to be determined, and it is supportive of the idea that the traditional location of the Exodus route might indeed be incorrect as Gal. 4:25 seems to suggest.